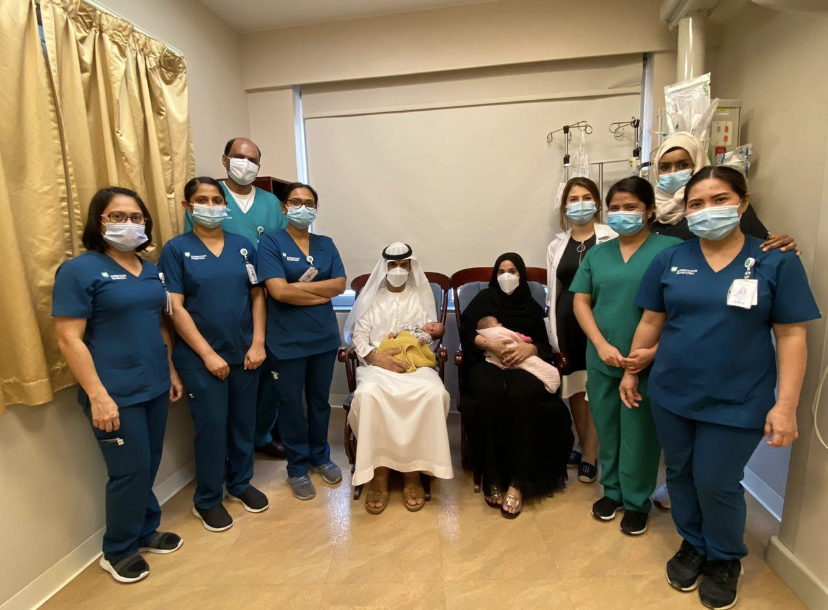 After being born 15 weeks early, twins have been discharged without any significant complications and a stay of almost three months at American Hospital Dubai. The first three weeks in the neonatal intensive care unit (NICU) were challenging with episodes of infections, feeding intolerance, and the potential need for escalating breathing support. However, the babies did very well and surpassed common hurdles. In fact, despite being ventilated once for a total period of seven days, the twins are currently thriving and in excellent health, and the proud parents could not be more delighted.

Dr Tamara Aladhami, Consultant Gynaecologist at American Hospital Dubai who was responsible for the delivery of twins, said: “Being pregnant with twins is an exciting event for parents. However, twin pregnancies do pose increased risks for complications, with more than 60% of pairs born prematurely. Those who are born before 28 weeks are considered severely premature having an increased rate of complications. At just 25 weeks of pregnancy, Mrs. Maryem, pregnant with twins, suddenly started experiencing labor pains and was rushed to the American Hospital Dubai, where she was found to already be in advanced labor. Without any time to administer a full dose of medication to condition the 'babies' lungs, the patient was quickly taken to the labor room for delivery. An entire team and was assembled - The neonatal team, anesthetic team, midwifery and the operating room staff were urgently called in to assist. The first twin was delivered naturally, but the second one was in what we call a ‘traverse’ position, necessitating a successful emergency C-section.”

Dr. Sridhar Ramaiah, Neonatology Consultant at American Hospital Dubai said, "We are so proud of the progress the twins have made after being born against all the odds. When born, the twins were tiny – they were the size of a hand and as heavy as 3 ½ apples. Our teams have worked to achieve 'golden hour 'care' within the first hour of the 'babies' admission to the hospital's NICU. We worked on ensuring optimal breathing support, incubator care, temperature management, establishing central lines as well as invasive arterial blood pressure monitoring, and timely antibiotics administration – all within the first hour of the ''twins' admission to the unit. We know that this way of management makes a big difference in the quality of the outcome.”

The twins quickly hit their weight milestones, at times, even doubling in a matter of weeks. Although the second-born twin was initially more unwell than the firstborn, she ended up recovering smoothly. She struggled with patent ductus arteriosus, commonly known as open duct – a condition of the heart blood vessels but was successfully treated using medication only. Although the 'parents' positivity and commitment were key to their 'twins' successful recovery journey, the success must be attributed to the American Hospital Dubai for delivering on the highest standards of clinical excellence through their world-class infrastructure, access to cutting-edge technology, and a highly-certified team of professionals.